The Comic Bug joins in on the fun at The Phantom Carriage’s THIRD ANNIVERSARY PARTY as we bring THE COMIC BUG CARNIVALE to the evening’s already awesome festivities!

Here’s what else to expect!

Join us on Saturday, March 17th for our Three Year Anniversary and Nuclear Blast collaboration release party! It’s guaranteed that this will be the weirdest, darkest, brewery anniversary you’ve ever been to…

We are beyond excited to announce this collaboration as we have been fans of the music that Nuclear Blast puts out for many, many years… and when this opportunity came up we were stoked to partner with them and develop a unique beer that is inspired by Germany’s Black Forest but is also approachable with West Coast influences.

If you would like to purchase cans but wish not to attend the collaboration release party, cans will be available from our taproom starting at 4pm. After 5pm, event tickets will be required for entry.

Brace yourself for one mind-blowing evening of shock, horror, and indulgence led by the demon puppets of Dead Marionette Theatre! Show Time: 8:30pm

Dead Marionette Theatre is a fully immersive, 360-degree over-the-top experience, unlike ANYTHING you’ve ever witnessed!

Part rock show, part freak show, DMT is the equivalent of a RAGING party in a haunted house on the eve of the Apocalypse. Steeped with decadently offensive imagery, Dead Marionette Theatre takes aim at anything and everything with the twisted sense of humor of a serial killer.

Normal taproom hours will take place from 12pm-12am. Our back parking lot will be closed for the entire day/night. At 5pm a ticket will be required for entry, and anyone under the age of 21 will not be permitted to stay. 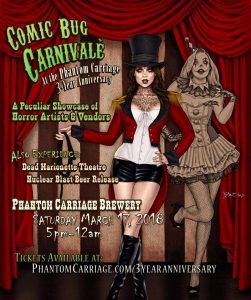