On the heels of Tim Burton’s hit BATMAN in 1989, the screenwriter, Sam Hamm was hired to bring Alan Moore and Dave Gibbon’s dystopic super-hero social commentary WATCHMEN to life for the big screen.

It never happened. Well, not until many years later when Zach Snyder gave us a literal film adaptation of the comic series. The gang at DEVELOPMENT HELL and SKELETON CREW PRODUCTIONS are taking on their biggest, most ambitious table read to date, reading Mr. Hamm’s 1989 final draft of THE WATCHMEN!

There are many fun detours from the original source material, including an ending that MIGHT provide some clues to just HOW the Watchmen will be crossing over into the DC Universe in the very near future!

As we read 1989’s WATCHMEN, Batman and the Flash are trying to solve the mystery of “The Button”, the iconic, blood-spattered happy face button worn by Rorschach throughout the seminal series.

Don’t miss this once-in-a-lifetime opportunity to catch what “might have been”! FREE! 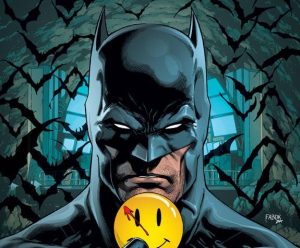