Mike Mignola will be making his debut appearance at THE COMIC BUG CULVER CITY to sign copies of HELLBOY AND THE B.P.R.D. #1!

Written by Mike Mignola and John Arcudi, gorgeously illustrated by Alex Maleev with lush colors by Dave Stewart, HELLBOY AND THE B.P.R.D. follows Hellboy’s early adventures with the Bureau of Paranormal Research and Defense in the 50’s.

A bizarre series of murders and rumors of something worse lead Professor Bruttenholm to send a young Hellboy to a Brazilian village on his first mission. Hellboy and a small group of agents uncover something terrible in the shadows of a sixteenth-century Portuguese fortress . . .

Swing by and meet the creator of all that is HELLBOY and celebrate this exciting new chapter in Hellboy History! 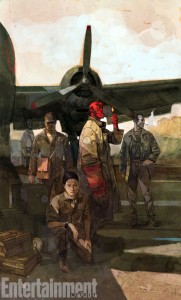