Come to THE COMIC BUG Saturday evening to meet (and par-tay!) with DEATH OF WOLVERINE writer CHARLES SOULE!Mr. Soule will also be signing anything and everything else from his impressive body of work (LETTER 44, SWAMP THING, SUPERMAN/WONDER WOMAN, SHE-HULK, RED LANTERNS, INHUMAN, and many, many more!)In addition, we’ll be giving the first 100 attendees of the evening a FREE DEATH OF WOLVERINE PINT GLASS featuring awesome artwork by JEFF STOKELY!

The party runs from 7:00 to 10:00 p.m. so you can attend both THIS event and LONG BEACH COMIC-CON! Now, that’s an awesome day, true believers!

Charles Soule is a Brooklyn, New York-based comic book author, musician, and attorney, known for his series 27 published by Image Comics, ‘Letter 44’ from Oni Press, ‘The Death of Wolverine,’ ‘ Superman / Wonder Woman’ and other titles. 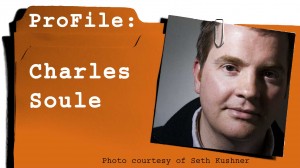