Join us Wednesday, March 21 as we give Sir Richard Starkings a warm welcome back to The Comic Bug to sign copies of the final issue of Elephantmen as well as the premiere issue of THE BEEF! We’re teaming with the fine folks at Comic Con Revolution – Ontario to make this a very special event with festivities, pizza and more!

Long a staple of The Comic Bug community, Mr. Starkings moved to Tennessee last year and has been sorely missed within these walls ever since! Creatively and spiritually reinvigorated, he’s spending his time in Tennessee spreading the gospel of comics and working on several exciting new projects, the first of which out the gate is THE BEEF with Tyler Shainline and artist Shaky Kane of BULLETPROOF COFFIN fame! 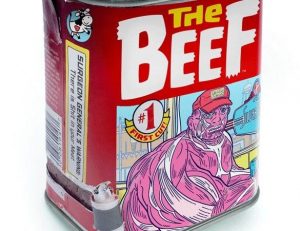 The creator of ELEPHANTMEN and the creator of The A-Men join forces with TYLER SHAINLINE (Liberty Justice) to bring you the story of Meat Men! Chuck is a mild-mannered meat factory worker who is a little in love with a strawberry picker named Mary Lynn. But everything changes when Mary Lynn falls victim to the Vodino Brothers….

Don’t miss out on this special event!