DAVID LAPHAM’S STRAY BULLETS IS BACK!

The award-winning crime series is back with an all new story arc entitled STRAY BULLETS: KILLERS.

STRAY BULLETS is for fans of hard-hitting, character driven crime stories in the vein of Quentin Tarantino or the Coen Brothers. Often quirky and nostalgic, each issue is packed with people you’ll both love and deplore (sometimes it’s even the SAME character!)

SATURDAY, MARCH 29th, meet STRAY BULLETS creator DAVID LAPHAM for a very special signing at The Comic Bug. We will announce the hours of the signing in the very near future, but be sure to RSVP here for updates and even a chance to win a nifty STRAY BULLETS prize the day of the signing! 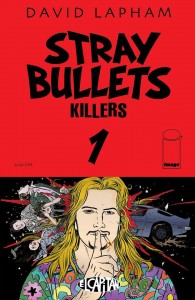