You won’t understand comics until you misunderstand them!

We turn a jaundiced eye toward all that is wrong with the “invisible art”. Every innovative idea that still shuffles along past its much-deserved death, every awful web comic that still manages to rack up a million page views with recycled Star Wars jokes, the once great artists and writers who have become caricatures of their former selves, and the new talent ready to discover bold new ways to sell out.

Tim Heiderich is a writer and longtime fan of comic books and comic art, both good and bad. Misunderstanding Comics is co-written and illustrated by Mike Rosen, the writer/illustrator behind the satirical adaptation of The Malleus Maleficarum: the Medieval Guide to Hunting Witches. 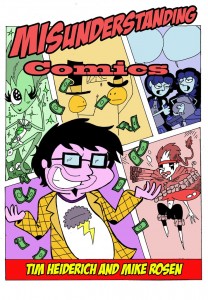