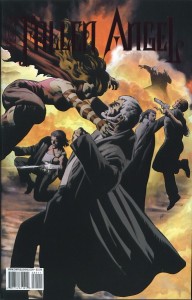 For more than two years, readers of Fallen Angel have been enjoying a dark atmospheric tale of a former celestial being who continually defies THE BOSS by helping those who can’t help themselves. Now reaching issue 25, Fallen Angel is the longest running title in IDW Publishing history.

To celebrate this landmark issue, IDW is giving away original pages of J.K. Woodward’s series artwork at two different promotional events. This issue will be special in more than just number, though. Peter David is promising an absolute upheaval in the story, “The great thing about a creator-owned series such as “Fallen Angel” is that I can unilaterally kick over the apple cart without having to run it by a plethora of Powers That Be, and that’s what’s happening. The great thing about working with (artist) J.K. Woodward is knowing that he’s able to take whatever I throw at him and knock it out of the park.”

IDW’s Editor-In-Chief, Chris Ryall, calls J.K.’s work consistently brilliant and “nothing short of awe-inspiring”. J.K. is thrilled with the series success, “Peter gave me some exciting challenges with this story and I’ve had a great time illustrating. There’s a reason I’ve stayed with this series for over 2 years!”

J.K. reveals that loyal readers will be rewarded with bonus features in this issue, including a double cover and character gallery, but that the extra content also makes it a great time for new readers to jump in. “…It not only introduces the characters but gives a summary of the story so far. It’s a perfect jumping on point for first time Fallen Angel readers.”

As for the free artwork, a page will be given to each of the first 10 people to attend one of these promotional events:

Wed April 2, from 7-9pm:
Golden Apple Comics
7018 Melrose Ave, LA 90038
www.goldenapplecomics.com
Artist J.K. Woodward will be on hand to sign his pages, copies of the comic or pretty much anything the fans want to stick under his sharpie.