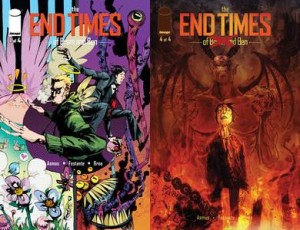 Come meet writer and performer JAMES ASMUS as he signs copies of GAMBIT, THIEF OF THIEVES and his creator-owned sensation THE END TIMES OF BRAM and BEN on Wednesday, February 20th from 5;00 to 8:00 p.m. at THE COMIC BUG!

THE END TIMES OF BRAM AND BEN reads like a slacker-ific version of Oh God! You Devil! and James’ run on GAMBIT has been flying off the shelves since the first issue dropped 8 months ago.

Be sure not to miss this unforgettable evening at The Comic Bug!