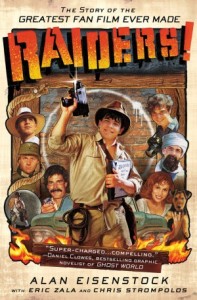 In 1981, in Ocean Springs, Mississippi, ten-year-old Chris Strompolos and eleven-year-old Eric Zala met on a school bus. They discovered they shared a passion for comic books and the film Raiders of the Lost Ark, and a friendship was born. They decided to re-make Raiders—every scene, every shot, every stunt—even though they had no camera, no money, and no clue how to make a movie. But what they did have was a vision, sheer will, limitless imagination, and each other.

Incredibly, they realized their dream, though it took them a staggering seven years to complete their movie. By then, they had grown up – and almost burned down the family home, nearly killed Eric, and stopped speaking to each other. Twenty-nine years later, today Raiders of the Lost Ark: The Adaptation has an obsessive and devoted following of millions and is considered the best and most successful fan film ever created.

Now, this new book retraces the steps of the guys’ remarkable journey from childhood play to worldwide celebrity in RAIDERS!:The Story of the Greatest Fan Film Ever Made by Alan Eisenstock with Eric Zala and Chris Strompolos (Thomas Dunne Books/St. Martin’s Press: November 13, 2012). $25.99

On Saturday, December 1st at 7pm, we’ll be screening the movie at THE COMIC BUG to be followed by a Q & A with Chris Strompolos, Eric Zala and author Alan Eisenstock. Seating will be limited! Purchase the book early to guarantee a spot!
And RSVP on our Facebook Event to remind you of the date!

Check out the fun book trailer!