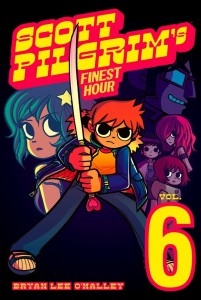 The highly-anticipated FINAL VOLUME of the epic Scott Pilgrim graphic novel series from Oni Press will be released on Tuesday July 20th, and popular culture will never be the same again.

Six years and several manga-sized volumes after Scott Pilgrim’s Precious Little Life hit the stands, the world waits with bated breath for the final chapter in the series. Seeing release just in time for Comic-Con and then, less than a month later, the big-screen adaptation, Scott Pilgrim vs. the World, Bryan Lee O’Malley’s character is ready for his Finest Hour.

Come join us as we celebrate this release with an epic slacker party that’s all Scott Pilgrim! Dine on free cheap food (that Wallace probably paid for), play video games till life has lost all meaning, and groove to Scott-tastic tunes! Highlights include:
*exclusive giveaways!
*costume contest with prizes that don’t really suck too bad!
*8-bit video games and music to whet the appetite for the upcoming Scott Pilgrim video game!
*act out all your groupie fantasies by becoming Sex Bob-omb in all-night Rock Band play!
*defeat Scott in a bass duel and make him fork over his parka!!
*buy all previous volumes of Scott Pilgrim (including Bryan Lee O’Malley’s Lost At Sea) at 30% off!!
*feel the Indie vibe as all non-Marvel/DC comics and trades are 50% off!!
*did we mention free pizza..? WELL WE ARE NOW! FREEEE PIZZZAAAA!!!

So come one, come all to The Comic Bug’s all-ages, super-fun party that takes place at a decent hour: 6pm – 10pm.