Release Party
After many years of waiting, another Mac Afro #1 was released by co-owner of The Comic Bug, Mike Wellman.Writer, Mike Wellman, who was also responsible for Gone South,
Read More 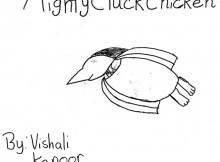