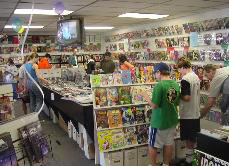 We, at The Comic Bug, would like to thank everybody for coming to our sale and supporting this wonderful cause. The money raised will go to helping many children whose lives were affected by the disaster. Thank you to our supporters and also to our artist who gave their time and merchandise for the event. Also thanks to Slave Labor Graphics and Diamond Comics for their donations. Please visit their sites to support the comic book industry!

“The Comic Bug” Comes to the Aid of Tsunami Orphans Over 300 patrons attended the Comic Bug’s Tsunami Relief sale January 15th and 16th, raising over $1,700 for the UNICEF Tsunami Relief Effort. The sale had been planned months before the natural disaster struck South but after store owner Jun Goeku viewed footage of the aftermath, he decided to take action by donating the entirety of the weekends profits to an organization dedicated to helping children affected by the Tsunami.

“I felt devastated and hopeless when I heard about what happened,” said Aerosol Press’ Philip Victor. “I was more than happy to participate in this event and do whatever I could to help in the recovery process. Rest assured, this is just the beginning.”

“Events like these should be a wake-up call to the rest of the world,” said Atomic Basement artist Guy LeMay. “If anything good could come of this, it’s the hope that everyone out there, our nation’s leaders included, wakes up and realizes that we’re all in this together.”