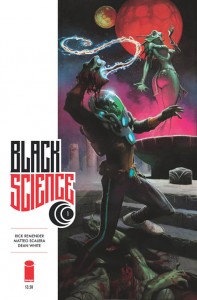 BLACK SCIENCE!  THE LAST CHRISTMAS! and, of course, DEADPOOL!

BLACK SCIENCE will be dropping this winter and we’re celebrating in a BIG way at The Comic Bug!  Writer/creator Rick REMENDER will be here to sign copies along with colorist extraordinaire DEAN WHITE!  Check out more of their work on a little book called CAPTAIN AMERICA over at Marvel!

BLACK SCIENCE:  Grant McKay, former member of The Anarchistic Order of Scientists, has finally done the impossible: He has deciphered Black Science and punched through the barriers of reality. But what lies beyond the veil is not epiphany, but chaos. Now Grant and his team are lost, living ghosts shipwrecked on an infinite ocean of alien worlds, barreling through the long-forgotten, ancient, and unimaginable dark realms. The only way is forward. The only question is how far are they willing to go, and how much can they endure, to get home again?

That’s just the tip of the winter iceberg!  From the demented minds of BRIAN POSEHN and GERRY DUGGAN (as well as the twisted, gnarled drawing hand of illustrator RICK REMENDER-that guy again) comes THE LAST CHRISTMAS!  These guys take the “Christian” out of Hans Christian Anderson!  They put the “dick” in Charles Dickens!  In other words, owning this post-apocalyptic Christmas tome will automatically put you on Santa’s NAUGHTY list!

And just put a cherry on top of what we’ve lovingly dubbed our “BEST HOLIDAY PARTY YET!” (more on that later), DEADPOOL artist SCOTT KOBLISH will be joining us to sign copies of DEADPOOL #20 which drops that day!  You might remember Mr. Koblish as the man who finally burst the DEADPOOL pinata open at our Deadpool Destructo party… or the guy that got The Comic Bug sued by the surviving members of SURVIVOR when he upstaged them with nothing but an acoustic guitar and his passion!  Witness…

NOT ENOUGH FOR YOU?!  Towards the end of the signing we’re kicking off our first annual COMIC BUG GEEK GIFT EXCHANGE! Bring a wrapped, new item to be entered into the fun!  We’ll be exchanging items beginning at 6:45 and going until the fun runs out.  Bring fun or ridiculous items valued from $?.?? to $??.?? Comic related things, sci-fi/horror, gags, something you yourself would love or laugh at.  We’ll have hot, spiked cider on hand as well as other holiday treats in store for you!