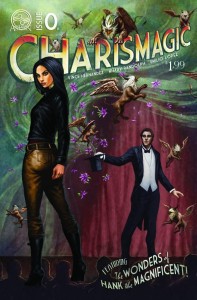 This Wednesday, everything you know about magic will… Vanish. Come see Vince Hernandez at The Comic Bug!

Charismagic #0.  Hank Medley is a Las Vegas magician enjoying life at the top until he unexpectedly realizes that in Sin City, luck can change at the drop of a hat–or wand–in his case. Powerful forces of magic once banished from our reality have returned, and Hank is about to step into a world where the wonders of magic have not only come back, but are even flourishing! With some of these newly arrived beings intent on vengeance for deeds done to them in the past, will Hank be able to survive this new landscape of reality—and magic???