Tony Fleecs, writer/artist of the comic In My Lifetime and Christian Beranek, writer of the comic Dracula Vs. King Arthur will be in the store signin 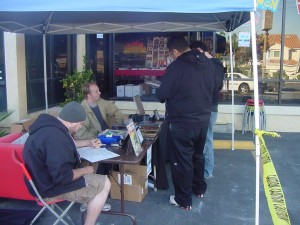 g from 11am-1pm and 3pm-8pm. They will be the first artists to sign at The Comic Bug since the devastating fire of 2006! They will brave the conditions in order to talk with their fans and help promote these cool new comic books.

In My Lifetime: Tony Fleecs’ balls are on the line. His debut comic explains why girlfriends are barred from comic stores and how cancer improved his sex life. Warren Ellis, creator of PLANETARY, TRANSMETROPOLITAN & THE AUTHORITY calls it “Brave, brilliantly observed comedy, and the first autobio comic in years that hasn’t made me want to punch the author in the stomach.” 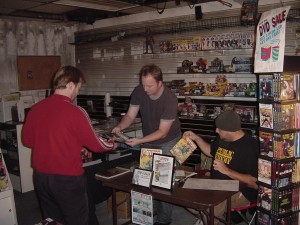 Dracula Vs. King Arthur: Vlad Tepes of the Dracul Order is in his final days. His empire is about to be overrun by an advancing Turkish Army. Vlad will certainly be killed and have his remains spread across the countryside…unless he makes a deal with Lucifer himself. He will become Dracula, the first vampire, and go back to the days of Camelot to destroy King Arthur.