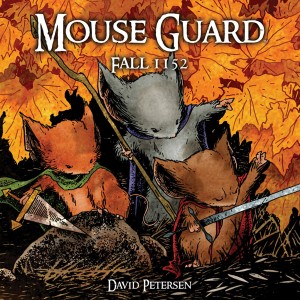 Written by & Illustrated by: David Petersen

In Mouse Guard, mice struggle to live safely and prosper among all of the world’s harsh conditions and predators. Thus the Mouse Guard was formed. They are not simply soldiers that fight off intruders; rather, they are guides for commonmice looking to journey without confrontation from one hidden mouse village to another. The Guard patrol borders, find safeways and paths through dangerous territories and treacherous terrain, watch weather patterns, and keep the mouse territories free of predatory infestation. They do so with fearless dedication so that they might not just exist, but truly live.

Mouse Guard: Fall 1152
When guardsmice Saxon, Kenzie, & Lieam are dispatched to find a missing merchant mouse that never arrived at his destination, they stumble onto much more than they had bargained for… intrigue, betrayal, and a deadly, traitorous plot to overthrow the stronghold of Lockhaven.

Mouse Guard: Winter 1152
It is the Winter of 1152. It is a harsh winter, a cold and icy season. And the Guard face a food and supply shortage that threatens the lives of many throughout the land. Saxon, Kenzie, Lieam, and Sadie, led by Celanawe, traverse the snow-blanketed territories seeking aid and acting as diplomats to improve relations between the mouse cities and the Guard.  This is a winter not every Guard may survive.

Mouse Guard: Legends of the Guard
Inside the June Alley Inn, located in the western mouse city of Barkstone, mice gather to tell tales, each trying to outdo the other. A competition, of sorts, begins. The rules: Every story must contain one truth, one lie, and have never been told in that tavern before. Legends of the Guard is a new Mouse Guard anthology series featuring the work of artists and storytellers handpicked by series creator David Petersen.