Richard Hatch, the phenomenal actor who brought APOLLO to life in the 1970’s Battlestar Galactica series, kept the torch glowing bright for BSG through the 80’s and 90’s and returned to play TOM ZAREK in the re-imagined BATTLESTAR GALACTICA series will be appearing at THE COMIC BUG CULVER CITY to send his 70’s personae off in style!

BATTLESTAR GALACTICA: THE DEATH OF APOLLO is written by Dan Abnett, one half of the team who assembled the line-up of GUARDIANS OF THE GALAXY that made it to the big screen and one of the greatest sci-fi writers in comics.

We will also be paying tribute to the dearly departed BATTLESTAR creator GLEN LARSON. 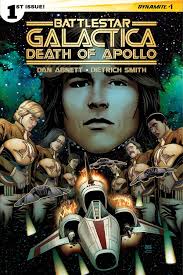