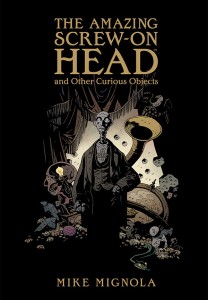 Join Eisner award winning writer Katie Mignola and her dad, Mike Mignola as they sign copies of their first joint effort THE AMAZING SCREW ON HEAD and Other Curious Objects this Wednesday at The Comic Bug from 5-8pm. There are other treats and surprises in store, so make sure you RSVP YES for a special Facebook prize!

The Amazing Screw-On Head and Other Curious Objects (hardcover collection):   Mike Mignola has deservedly become one of the biggest names in comics for his creation of Hellboy. But when Mignola needs a short break from the Hellboy universe, he turns to diversions such as The Amazing Screw–On Head, winner of the Eisner Award for Best Humor Publication!

When Emperor Zombie threatens the safety of all life on earth, President Lincoln enlists the aid of a mechanical head. With the help of associates Mr. Groin (a faithful manservant) and Mr. Dog (a dog), Screw–On Head must brave ancient tombs, a Victorian flying apparatus, and demons from a dimension inside a turnip. This new collection of oddball Mignola creations also includes “The Magician and the Snake” from Dark Horse Maverick: Happy Endings, and nearly fifty pages of brand new material, all as weird and hilarious as the beloved Screw-On Head.

* “The Magician and the Snake” won an Eisner Award for Best Short Story.