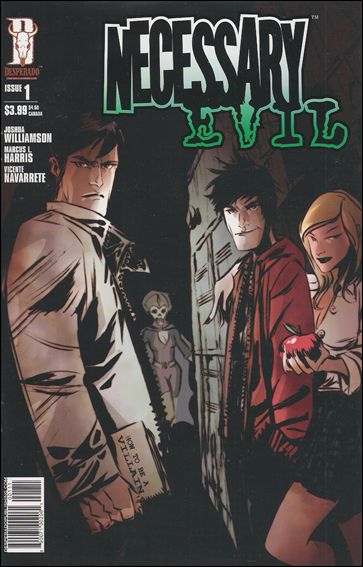 Necessary Evil Number 1 from Desperado premiered on October 10th and the creative team was on hand at The Comic Bug for the event. Writer Joshua Williamson, Artist Marcus L Harris and Vicente Navarrete a.k.a. Vinny spoke to fans and soon-to-be fans about their new series and autographed copies.

School is in session this October!

Jacob and Miller are the sons of the Matriarch, the world’s greatest super-villainess. The Matriarch is now dead at the hands of a super-hero, and the boys want answers… and revenge! They join the Necessary Evil Academy and become entangled in the world of brightly colored costumed criminals–meeting everyone from glorified bank robbers to homicidal murderers. As the brothers go to class to learn the tricks of the bad-guy-trade, they begin to unravel the secrets surrounding their mother’s death, discovering that her legacy may have destined them to become more than mere villains!