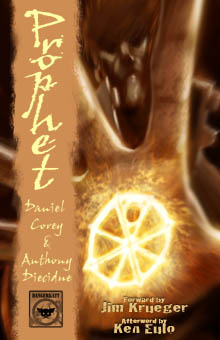 Prophet is the most notorious killer for hire in present day Mexico, but he undergoes a major crisis of conscience as he finds himself plagued by supernatural visions and the ability to see into the souls of others. Part Spaghetti Western, part horror, part gangster noir, Prophet delivers thrills with the blast of a six gun. Prophet is written by Daniel Corey, with art by Anthony Diecidue.

“It’s the story of a killer who wants to stop, but doesn’t know how. And so it’s the story of a man grappling with not only his inner demons, but external ones as well…There’s much to discover here from both artists…I can’t wait to see what they come up with next.” – Jim Krueger (Earth X, Justice)

“Prophet looks and feels just like a Spaghetti Western – but really belongs more to the worlds of horror and gangsterdom. If Sergio Leone or Sergio Corbucci had started out with a graphic novel on a storyboard, it might well have looked something like this.” – Sir Christopher Frayling (Rector, Royal College of Art, London; Author, Something to do with Death, Once Upon a Time in Italy: The Westerns of Sergio Leone)