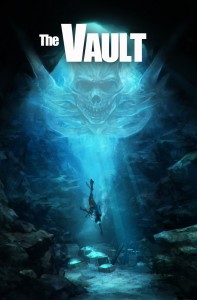 A small team of treasure hunters struggles to excavate a dangerous and legendary treasure pit before a massive storm hits Sable Island, the “Graveyard of the North Atlantic”.Equipped with all the latest technology, the scientists believe they are prepared against all of nature’s fury, but nothing can prepare them for what they are about to unleash from The Vault.

ABOUT SAM SARKAR
Born in Halifax, Nova Scotia, Sam Sarkar is a 23-year veteran of the entertainment industry. He began his career as an actor and was one of the leads on the long-running, syndicated television series Neon Rider. Following the series, Sam decided to pursue writing and worked for the hit television series Beverly Hills 90210. Stemming from his work on the show, he also co-wrote a television pilot for Spelling Entertainment under the direct guidance of TV legend Aaron Spelling. Deciding then to embark on feature films, Sam took some chances, following a varied path of writing screenplays and working as a sound technician. In 2004, after working on several films with actor Johnny Depp, Sam was asked to help run Depp’s production company, Infinitum Nihil, headed by Christi Dembrowski. As Senior VP at the company, he continues to serve the varied needs of Hollywood as an executive, producer and writer.

ABOUT GARRIE GASTONNY
Having worked as a comic book artist and illustration lecturer, Garrie Gastonny now mainly focuses on illustration to avoid getting beaten up. Garrie also serves as Senior Artist at Imaginary Friends Studios. His credits include Warren Ellis’ Supergod, Caliber: First Canon of Justice and Lady Death. For more information about the artist, please visit www.thegerjoos.deviantart.com