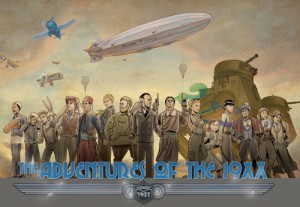 THE ADVENTURES OF THE 19XX with writer/artist PAUL ROMAN MARTINEZ

From creator Paul Roman Martinez:  “When I was a kid I loved Ducktales, and I especially loved the episodes where they looked for historical treasures or ran into William Drakespeare.  So I grew up with a sense of history being a great adventure waiting to be discovered.  That’s where this comic comes in, it’s like history, but with all the remotely interesting parts turned up to 11!”

Somewhere in the 20th century… not long after the end of the Great War, those who were capable of hearing it, received a revelation… another Great War was coming. This coming war would push the limits of technology, split the atom to create the power of a small star, and bring together forces more evil than the world has ever known. That this war would happen was man’s fatal destiny, but the outcome of the war and the details of it were not as clear. A weak League of Nations banded together to form a group. A group capable of doing what those countries could not. A group of adventurers, explorers, and scientists from every allied country to search the globe and fight a battle far from the public eye. This group is The 19XX, all the public has been told is that they are fighting for all of the good in humanity to survive the nineteen hundreds and beyond.

Their mission is to track down every powerful relic, every modern and undiscovered weapon, and every magic incantation ever uttered on the earth’s crust, because the forces of evil responsible for the next Great War would be searching for the very same thing. Nothing in the realm of the tangible or intangible is off limits when the fate of the entire world is at stake.

This is a book that has to be seen to be believed… Paul Roman Martinez has created and entire WORLD that readers can enjoy inhabiting as they check out this great book!  Don’t take our word for it.  See for yourself right here!