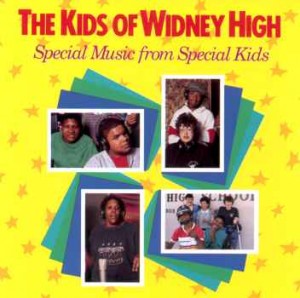 LIVE PERFORMANCE BY THE KIDS OF WIDNEY HIGH!

Join The Kids of Widney High and the artists of the KOWH comic book for a night of live art, comic book goodness and rock n’ roll as we celebrate the release of their first comic book.  All of the artists on the book will be onhand to sign copies and discuss their work on the book.

From Wikipedia:  The Kids of Widney High is a music group composed of mentally disabled students from the special education J. P. Widney High School in Los Angeles, California. The band consists of several (typically mentally) disabled students on vocals, with the instruments usually being played by non-handicapped teachers and session musicians. The group originally began as a song-writing class in 1988 taught by Michael Monagan, and has evolved since into two groups, one made up of graduates that performs in local clubs and the other a group of current Widney students in the songwriting class.

The group gained a cult following, primarily thanks to their frequent live performances at such “hip” Los Angeles venues like The Knitting Factory and Amoeba Music, as well as smaller venues like Chain Reaction in Anaheim and The Smell in downtown LA. As a result, the group often plays at a number of ska and pop punk shows, including a stint on the Vans Warped Tour. The group has also opened for The Melvins and Mr. Bungle, and have been included on several editions of the Kevin and Bean‘s KROQ Christmas Albums. Such notable musicians as Smokey Robinson, Jackson Browne, Marilyn Manson and Adam Horovitz have all cited themselves as fans of the band. [1]

In 2005, The Kids of Widney High were featured in the The Ringer, a comedy wherein Johnny Knoxville‘s character pretends to be mentally disabled in order to fix the Special Olympics and gain financially through betting on it. The group is seen performing “Pretty Girls” (which was also written by several members of the group) at a dance, and again towards the end of the film singing a version of the popular 1960s song, “Respect” in which the lyrics have been rewritten so that it becomes an anthem for those with disabilities.

Check out their sweet tunes at www.kidsofwidneyhigh.com !
For more on the Kids of Widney High Comic Book: www.atomicbasement.com