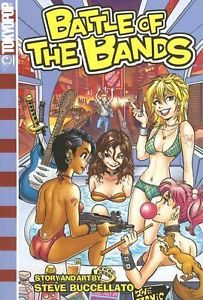 Steve Buccellato is an artist best known for his award-winning coloring work that has appeared in nearly all of the most popular American comics (too many to name!). He is also a busy writer / artist and an occasional self-publisher. Battle of the Bands is Steve’s most audacious project to date. BOTB is a hot new original english manga from Tokyopop about an all-girl punk rock band and their hapless roadie in a world where rival musicians fight it out…literally! As one reviewer said, Battle of the Bands is like “Josie and the pussycats on tequila!” 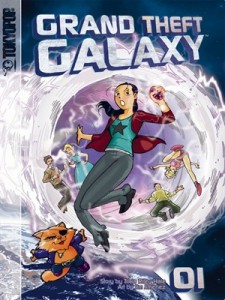 Tricia Riley Hale is an artist who has worked for Sony, Stan Lee Media and Disney, and who first broke into comics as a digital colorist working on comics like Uncanny X-Men with Steve Buccellato’s old team at Electric Crayon Productions. Grand Theft Galaxy is her first published book as a writer, but it won’t be the last! Future volumes and new projects are currently in the works. Grand Theft Galaxy is a comedy / adventure about a Pre-law student whose life takes an unexpected turn, on her 18th birthday, when she discovers she is really the offspring of intergalactic thieves! Suddenly, she finds herself on a hilarious quest to find a stolen treasure–and prevent the Earth’s destruction!

Both books are hilarious romps! We hope you will come by, meet the creators, and check them out!