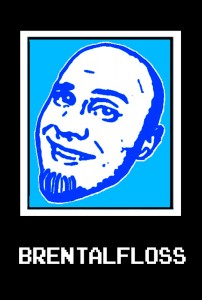 Brent Black, also known as “brentalfloss”, is a comedian, musician, and gamer. He is best known on the internet as the creator of the “With Lyrics” series, where he adds satirical lyrics to classic video game tunes and uses them to create music videos. He first gained notoriety in 2008 with the release of “Mega Man 3 With Lyrics”. Since then, he has expanded his base of Youtube subscribers to over 100,000, released a CD that reached #8 on the iTunes comedy charts, and has appeared at many gaming and anime events, as well as music venues all across North America.