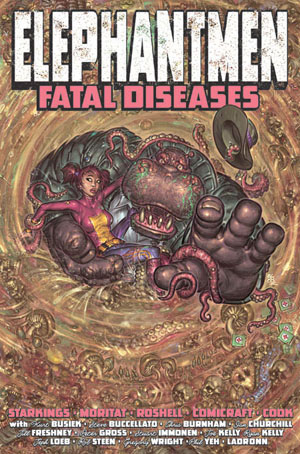 ELEPHANTMEN creator Richard Starkings will be swinging by THE COMIC BUG this Wednesday to infect you with the new ELEPHANTMEN hardcover, FATAL DISEASES — 312 meaty pages for $34.99! Also on hand, a small number of ADVANCE copies of the forthcoming ELEPHANTMEN trade paperback collection, DAMAGED GOODS, featuring the art of Marian Churchland from issues #18-20! A snip at only $12.99.

Richard will also be happy to sign copies of COMIC BOOK LETTERING THE COMICRAFT WAY, MARVELS! THE KILLING JOKE! DANGER GIRL! SPIDER-MAN: BLUE! DAREDEVIL: YELLOW! SUPERMAN: KRYPTON! Anything with his name in it!