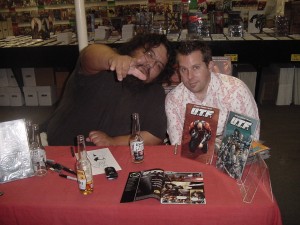 “Since the founding of America, there has been a darkness at work that the general population konws nothing about. But there is an elite corp of soldiers ready to deal with the things that go bump in the night: THE U.T.F. (Undead Task Force)”

Meet the team responsible for U.T.F. (Undead Task Force) at The Comic Bug on November 15th from 5-8pm. Tone Rodriguez and Will Wilson shares their thoughts on the book and will sign autographs and may do sketches for fans. Come by for the show!

Also come on by and wish Mike Wellman a Happy Birthday! (Don’t tell him how you found out!)